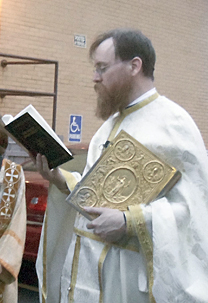 Father David Eynon has been serving the Annunciation Greek Orthodox Church since August of 2008. He is a graduate of Doane College in Crete, Nebraska with a degree in History and English. Originally, he went to school to earn a degree in Education, trying to follow a calling to teach; however, God had other plans.

Fr. David did not grow up in an Orthodox home. Like many Americans today, he grew up around both Protestantism and a pair of parents who vigorously encouraged him to ask questions. This led him to some uncomfortable answers about the faith tradition he grew up in. Therefore, he spent much of his young-adult life embracing and even arguing for secularism.

Orthodox Christianity first appeared in Fr. David’s life while he was on a school-sponsored trip to the Soviet Union, just prior to its collapse in 1991. For the first time in 70 years, the Orthodox Church was able to openly celebrate the Nativity of Christ. Witnessing one of these services at The Trinity Lavra of St. Sergius in Segiev Posad was a watershed moment in his life. No longer could he simply dismiss Christianity as a whole, because this was something truly apart from the Protestantism and Roman Catholicism that had been his entire experience of the faith.

For nine years, he was forced to wrestle with this new reality. During this time he kept meeting various Orthodox Christians and seeing Orthodox services. Finally, after experiencing Holy Saturday for the first time, he knew he had found home.

While making this journey, he lived in Urbana and Champaign, IL where he eventually met his wife Diana, a native of Romania, at Three Hierarchs Greek Orthodox Church. It was there that they got married and baptized their first child. It was then, as Fr. David like to describe it, that the Holy Spirit hit him over the head with a baseball bat. Having discerned that he was to pursue the priesthood, he and his family went to Holy Cross Greek Orthodox School of Theology in Brookline, MA. Two children and a Masters of Divinity later, Fr. David was ordained first to the Diaconate and then the Priesthood in 2008.

He truly loves the Midwest and sees it as a great blessing to have been assigned back in Central Illinois where he embraced the Orthodox Faith. He is also thrilled to be a part of the Annunciation Greek Orthodox Church, a very blessed and special community within the history of Orthodox Christianity here in Illinois.

Father keeps a blog which you can read here.

We also honor the following priests who have served this community since 1927: