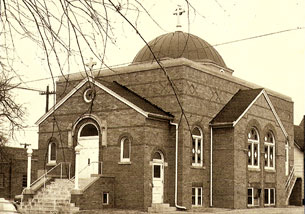 The greatest tragedy in all of history is Jesus Christ on the Cross. Three days later, He transformed that tragedy into the Resurrection. Thus, God is quite capable of transforming all tragedy, so that blessings spring forth from the ashes. Though we might not be able to see this fruit with our own eyes or within our lifetime, God does actively work to transform our pain and suffering just as Christ’s pain and suffering ended with the Resurrection.

The history of the Annunciation Greek Orthodox Church in Decatur, IL is a witness to this reality. At the beginning of the 20th century, a group of Greek men, while working on the railroad in Decatur, died in a tragic accident. Their deaths were a catalyst for the Orthodox community in Central Illinois to come together in order to properly bury these men within the Orthodox Church.

On April 14th, 1919, a charter was granted by the State of Illinois for the Organization of the Hellenic Society of Decatur, Illinois. Sam Malleos, Nick Spell, Peter Balamos, James Dovekas, Peter Bacopoulos, George Calfas and George Davis were all named directors. Through the support of Orthodox Christians throughout Central Illinois and the generosity of friends and neighbors in Decatur and the surrounding areas, the formation of the Hellenic Society of Decatur was the first step in founding the first Greek Orthodox Church in Central Illinois.

On Christmas Day, 1927, Fr. Emmanuel Papapanagiotou served the very first Divine Liturgy at Annunciation Greek Orthodox Church. Through the faith and hard work of our founders and those who followed, our doors have been open to all who wish to experience and participate in the ancient Orthodox Christian faith ever since.

Railroad tracks run next to our building. At various times during worship services, the sound of a train rumbling by, blowing its whistle can be heard. They are a constant reminder of how God transformed the tragic deaths of several railroad workers into an Orthodox Christian community that has bridged several generations, languages and cultures.